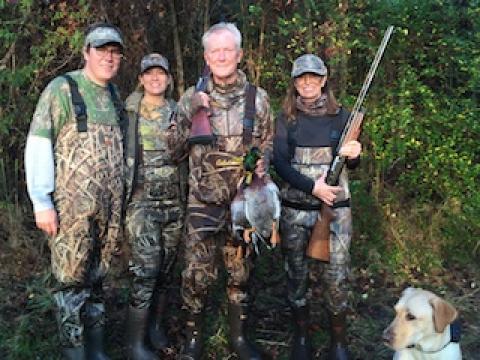 Wading through dark, murky water and then.....

0
If you want to go duck hunting, check out my adventure at DW Outdoors in Mullins, SC! .. Great ducks, not so great duck hunter!

It was to be my third duck hunt at DW Outdoors Mallard Preserve, in Mullins, SC and it became very obvious the first two were very tame compared to this one!  This was the real deal… I was wading through dark, murky waters before daylight unaware of all the perils such as unexpected tree roots, and sudden drop-offs.  I held on to my new 12 gauge Benelli for dear life fearful I would fall into the water and ruin it.  I had no idea when my husband instructed me to go out and buy chest waders that I would really end up needing them.  I thought I was just dressing the part,  all camo cute in my matching  jacket and hat.  That is not at all what it was.  Instead of sitting in a comfy blind in a nice bench seat like last year, I was standing up trying to keep my balance while being tucked in behind branches and bushes.  I was a bit out of my element to say the least.  I was told to move to a different spot so that I could get a better angle and I was completely convinced I was stepping on an alligator.  It was terrifying!!!  Of, course, it was a tree stump, but it was very disconcerting.   I made the stupid comment that I thought the swamp smelled really nice and there must be cedar trees all around but then realized I completely forgot my husband clipped my Thermacell on me earlier.  Geez!!!  I ended up actually downing 4 ducks but I think my husband may have helped me with a second shot on one.

All in all, I would not have changed a thing, While my husband and Tripp III have been going to DW Outdoors for years, Lindsay and I add a lot of fun to the excursion!   Our host, DW and his staff were amazing as usual-  Frank was as helpful as could be – While we were there, we took advantage of the rifle range and got some great tips from Frank.    Jeff… what can I say?? Besides his big fun personality,  his skills at calling in the ducks is unsurpassed.

You must call DW and hunt this amazing facility.  He is the perfect host and cannot do enough to make your hunt more fun and rewarding.  The lodge and the grounds are superb- but be ready to eat incredible southern cooking that you will talk about for days to come!!!

Being able to enjoy my two passions, hunting and writing is amazing! I started my blog, Camo365 a year ago in September with a mission to call... more »

What's your skinny on this?